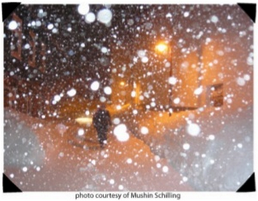 Mystery lies at the very core of the polyverse we inhabit — even if we think it’s a universe and started with the mother of all bangs - starting explosively simple and as an absolutely single matter in the beginning, growing ever more complex, intricate, diverse into every conceivable and inconceivable direction and dimension. Banging into being and exponentially expanding ever since is the Mystery of Thrivability.

No matter at what level we contemplate it — the empirical, spiritual, psychological, social, economical, ecological — it puts us in awe. It is completely out of control — put a lid on it, it thrives sideways. Explode it, and its fragments disperse spores all over the cosmos. Try to grasp it, and it wiggles out of your grip, sprouting between your fingers, using your suppressing power to fuel its thriving.

These last couple centuries, a belief flourished that at some moment we would be able to explain it all, we will arrive at a Grand Theory of Everything. But all we managed to do was to put a lid on common imagination, and diminish the power of the priesthood of traditional religion and feudalistic rulers. And the old clergy was replaced by the adepts of numbers, statistics, and physics. Matters that were allowed to concern us were either turned into a fact or a commodity, into something that could be manipulated, traded and studied. Everything else was declared to be “merely subjective” and therefore a negotiable matter.  And all the while, the mystery was thriving under our subjective noses.

And now, in our 21st Century, like in Andersen’s famous tale, the emperor’s objective clothes turn out to be no cover at all! The naked mystery arises as thrivability in the sciences, as co-evolution, drifting genes, fractals, parallel universes, social graphs, complexity, and in religion it comes as an explosion of spiritualities, in economy as the irrationality of consumers (and producers) behavior and in ecology…
Imagine a clearing in a jungle. The clearing is the space we can understand and control in a very limited way; it’s the space most of us like to inhabit. And as the clearing grows, the interface between clearing and mysterious jungle also grows, exponentially. So for everything we find, we grow another mile of interface with the mystery. The mysteries thrive with the expansion of our knowledge.

Now imagine that we live in multi-dimensional space-time, endless mysteries surround us in every direction around every clearing we call our world. This is the mystery we inhabit, and it thrives from the very beginning – in fact it is the very basis of existence and being: The Mystery of Thrivability.